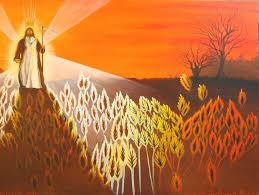 Another story from the Sea of Galilee; another image from the Jezreel Valley where sowing and reaping are the main business.  As you read the Gospels, Jesus has many comparisons – laying one concept alongside another in order to give a clearer picture of something that is basically mysterious, or at least such a new concept that he wants people to see the religion he brings in a new light.  His description of the Kingdom of God is not only NOT what people expected, it also seems pretty irreverent beside the rule-bound religion of the Pharisees, the church fathers of the day.

Jesus uses many ‘parables before the parables,” says Biblical scholar, Robert Farrar Capon.  “I will make you fishers of men,”  “Those who are well do not need a doctor, only those who are sick.”  “Are the wedding guests able to fast while the bridegroom is still with them.”  All of these examples of laying one image next to another come from the early parts of the Gospel of Mark.  Now further along, his parabolic imagery becomes full-blown stories.

So let’s look at the parable of the Weeds.  Jesus makes it clear that the farmer’s seed was good, meaning that he had every right to expect it to produce an excellent crop.  The farmer wasn’t negligent, he worked his field and went to bed at night, and the seeds were ready to do their work on their own.  And they did.  But something else was at work, too.  An enemy, did something evil, and sowed other seed into the field as well.  So when the wheat came up, so did the weeds.  Any gardeners here?  Any farmers?  The field hands were right, of course.  As soon as you see weeds you pull them.  You want the good crop to get all the sun and all the nourishment of rain.

But this farmer is different.  He waits.  Let them grow up together, there will be plenty of time at the harvest to separate the productive crop from the weeds. Lots of people want to rush right to the end of this story and let the weeds have it.  They will be ripped out and thrown into the fire, and the product of the good seeds will shine.  I’d like to spend a little more time talking about the weeds and the wheat growing together, looking so much alike that to pull out the bad kind, you’d end up pulling up some of the good stuff, too.  That’s pretty much what my world looks like, maybe yours, too.  So much of the good and evil at work around me is hard to separate.  Life is too ambiguous, too complex and complicated.  You think you know what’s right, and when you set out to do it, there are often unintended consequences that make your decision hurtful of yourself or other people you never meant to hurt.  I say it’s a good thing that the final decision about what’s weeds that get burned up and what’s wheat that gets saved is not up to us.  Those judgments are God’s judgments.  None of us is in a position to declare someone else’s behavior to be something that God cannot tolerate or something that will condemn them, because each of us had weeds and wheat of our own.  In the field of our own hearts wheat and weeds grow together.  We can’t help it, we are only human.

Michelle and I saw, “Dawn of the Planet of the Apes,” last night.  Each of us was thinking of a different conflict as we watched a peaceable society that thought it could live quietly on its own terms be confronted with fear, hatred, and old wounds that eroded the trust of even those who were most determined to keep the peace.  Once the first shot is fired, there is no going back. We see the same thing happen in wars, in mob rule, in vengeance.  Violence only begets more violence, said Dr. King. Look at the world around you and the conflicts, political and religious that inflame it.  We are confronted daily by evil in the form of fear, old wounds, intolerance, lies, greed….you can make your own list.  We find that we fight the same battles in our own decisions and the way we react to the people and situations around us.  We cannot be generous, we cannot be trusting, we cannot be forgiving unless we are centered in that overwhelming love of God that makes us free to be like God ourselves.

So it’s a good thing that God doesn’t make judgments about heaven or hell for us based on our goodness or badness, but rather on God’s love for humanity, shown in the life and death and resurrection of Jesus.  He is the seed of God’s word, calling us always to live as God’s people.  It is not because we will win God’s love or get a special place in heaven that we live as salt and light in the world.  It is because we have already been saved and forgiven by God’s love that we want to care for a hurting world, and be the story of God’s love for it.  So God lets us grow, good and evil together until the day when God calls us home to live there forever.  And at the same time, God sends the Spirit to open our eyes and hearts to be the kind of good seed that produces love and blessing to all who need it.  May you bloom in God’s grace.  Amen.

All are welcome to join us at worship. Sunday Mornings: Worship at 9:30 am with communion every week with the option of also with Zoom. We love to have babies and toddlers at worship, and the wiggles and noise delight us.  Little ones are welcome at Sunday School(not in the summer) if they are … END_OF_DOCUMENT_TOKEN_TO_BE_REPLACED