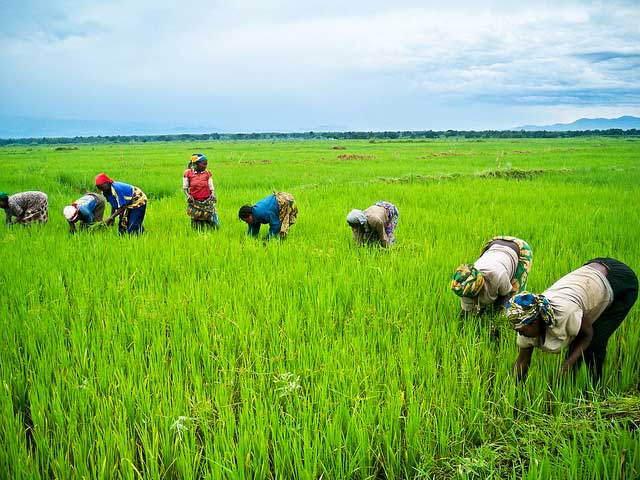 Anybody here a gardener?  Tell me how you feel about weeds?  Do you let them grow up beside your plants and use them for kindling when you separate them out at when the season is over?  No way, right?  You want to get those weeds out before they take over productive territory, before their roots get so firmly entrenched you’ll never get rid of them, before their flowers go to seed and you’ll get a new crop next season.

So what is Jesus trying to say with this ridiculous story?  What was he trying to say to the people of his day, and what is he saying to us today.

It’s important to remember that Judaism in Jesus’ day was a purity religion.  It was important to follow the law to the nth degree.  Not only did faithful Jews – example, the Pharisees, which were a denomination within Judaism like Baptists and Presbyterians are today – try for perfection in their following of the law, they did not associate with anyone who was unclean.  Unclean could mean anything from those pagans who worshipped fertility gods and ate pork and shellfish and didn’t wash before eating, to fellow religionists who were sloppy in their devotion to following the same laws you did.  In the denominations that were expecting a Messiah to come and save them from occupation by pagans, and to bring the perfect peace of Yahweh, the completion of the perfection they strove for would come to pass. They would regain the territory promised to them, as God’s Kingdom was made manifest on earth.  This is still the thinking of the Orthodox Jews in Israel today.  They believe that God’s Kingdom will come when everyone follows the law as they do, and that the original land of Israel will be regained.

The fact that Jesus was not as diligent about following the law was a constant irritation to the purists, the Pharisees.  How could he be the Messiah that some people claimed if he did not follow the law to the letter?  Jesus instead was interested in bringing God’s compassion and demonstrating God’s steadfast love to the sick, the marginalized, the outcasts, the egregious offenders like the tax collectors.  In Jesus’s parables, God’s generosity and God’s patience are emphasized, not God’s judgement.

To us, this parable has much to say about the existence of evil in our world.  In the time since Jesus’ resurrection and ascension, we still live in a world where evil has power.  It can strike at the very heart of everything we hold dear and threaten o destroy our lives.  Just as in the time of Jesus, there is no way to separate the good people from the bad people and line them up, sending the good to God and the bad to Satan.  It was Alexander Solzhenitsyn we said that the line between good and evil runs right through each human heart.  Our hearts are a mixture of good and bad, mercy and cruelty.  So are our congregations a mixture of acceptance and judgement.  The tendency to look down at others in our community because they are not good Christians, like we are, is just as prevalent now as it was with the Pharisees.  We try so hard to draw theological lines about who can be accepted into our community without tainting us.  We think it is our business to turn away people who don’t keep the rules that we claim God has set for us, and religion becomes an offense to the very people who need to know Jesus the most.

What we see in the parable of the weeds and the wheat is God’s forbearance of the work of evil in the world, and that all communities will be a combination of those who trust in God and those who don’t.  It is not until the end of the season, that the weeds are separated from the wheat.  There is no effort to rip out the offenders if there is a chance that the good stuff will be ripped out along with them.  Let them be, says the farmer, until the day for harvesting.  The message is that the malice, the evil, the badness that exists in the real world and in the lives of real people is not to be dealt with by attacking or abolishing the things or people in whom evil dwells, rather it is dealt with by letting things be as they are, by living through suffering, by letting forgiveness be the method of healing. The message of Jesus is that what hurts us will not be uprooted in our lives, as we see him hanging on the cross, forgiving his enemies.  But evil will never win.  At the end, at the harvest, evil is finally thrown into the fire.  God will not let anything that harms us have the final word.  And God’s Kingdom will always prevail.  God’s Word, Jesus himself, is sown far and wide, even beyond anything we can imagine, to grow and thrive no matter what.  It bears fruit in our lives and the lives of those hear the word.  God’s invitation never stops and God’s forgiveness never ends.

This is the good news.  Our weeds and wheat hearts, will never keep us from God’s love or God’s forgiveness.  Our weeds and wheat communities which so often strive to perfection and end up instead being unmerciful, will not be ripped apart by God’s judgement.    We are held in God’s unfailing love, bearing fruit even as we struggle to be faithful in the face of the evil.  We wait for the day when we will be welcomed into the fullness of God’s love for us, and meet Jesus face to face.  We will see the scars of nail prints in his hands and know for certain that the evil we experienced could not ever have pulled us away from his protection. And we will be at rest.  Amen.

All are welcome to join us at worship. Sunday Mornings: Worship at 9:30 am with communion every week with the option of also with Zoom. We love to have babies and toddlers at worship, and the wiggles and noise delight us.  Little ones are welcome at Sunday School(not in the summer) if they are … END_OF_DOCUMENT_TOKEN_TO_BE_REPLACED