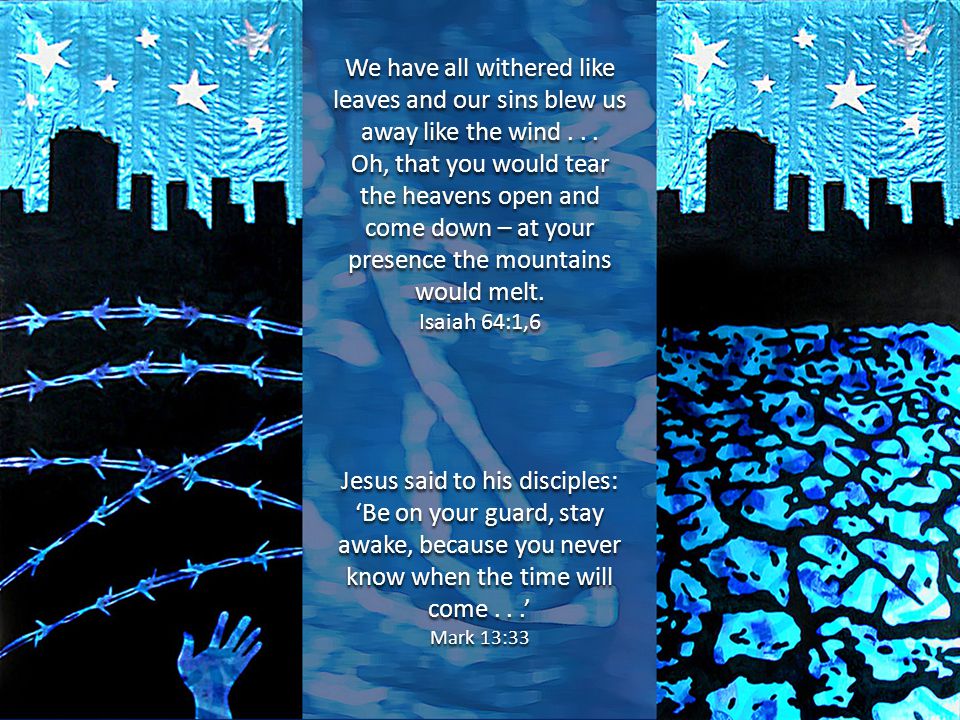 “O that you would tear open the heavens and come down….”  Difficult times call for drastic measures.  This part of Isaiah is a bitter shock after the gentle readings of promise that have comforted God’s people in exile.  These last 11 chapters of Isaiah reflect a time when the Persians sent the exiles back home.  The political and religious leaders had been marched away to Babylon 70 years before, and the priests had fought hard to keep their tradition safe and pure through three generations of Jewish kids growing up in polytheistic Babylon, Assyria, and now Persia.  As the exiles returned they found that the people who’d been left without their leaders had not kept their tradition as carefully. They worshipped in other places than Jerusalem, married outside of their religion. and incorporated traditions from the Caananites around them. It was an angry time.  Who was in charge: the returning leadership or the local leadership that had grown up in the meantime? Did God expect the returning leadership to bring back the ‘true religion’, or did God expect each to go their own way and worship God as they had when they were apart for all those years?  You can read the conversation between Jesus and the Samaritan woman in John, chapter 4 to get a glimpse of the breach, even hundreds of years later.

You can hear the pain of the writer:  where are you when we need you, God?  Why aren’t you zapping the offenders and clearing out the troublemakers?  Are we being punished for being confused or unfaithful?  When you hide from us, we don’t know which way to turn. You must be mad at us, or we would be at peace.

In the Gospel reading, Jesus has difficult times on his mind as well.  It is thought that Mark was written at the time of the destruction of the temple by the Romans in 70 AD.  It was a time of great suffering for all in Jerusalem, Jews and Christians alike.  How can you explain the suffering of God’s people who are being faithful in the best way they know how?  Jesus suggests that times of trial are not punishment but rather times to look for God’s presence. He wants us to wake up to the fact that the world we live in is not forever, and that the suffering we bear is a sign of something better to come.

We seem to be in equally confusing, violent religious times as well.  People feel it is a sign that we are approaching the end times.  Perhaps so, but Isaiah assures us that this is nothing new.

The real horror in times of religious stress and conflicting values is that it puts believers at each other’s throats instead of turning them into the peace makers that the world needs more than ever. People voice political preferences as the preference of Jesus – forgetting entirely that Jesus rejected the spirituality of the church of his day and invited in those the church marginalized.  Churches substitute their own comfortable traditions for the call of God to welcome the stranger.  Violence in the name of God is rampant in our day, in as large an example as the suicide bombers in the Middle East and in as small an example as the name-calling within our own congregation.  Is this God’s fault – “You hid yourself and we transgressed?”  Or is it because we are not awake to God’s presence among us?

In his conversation with us two weeks ago, Michael Keys warned us that the divisions of our past are present enough to make our time of discernment a time of fracture rather than a time of cooperation.  I cannot imagine anything more devastating.  His suggestion to us was that we step back from the fractures and disagreements of our past to find a new view of the Gospel with which to understand ourselves and our history as God’s people in this place.  Instead of focusing on what divides us, that we find the theology that binds us together.  I think the prophet Isaiah gives us the key to this new understanding: “Yet, O LORD you are our Father; we are the clay, and you are our potter; we are all the work of your hand….we are all your people.”  When we see ourselves lifted from our self-centered pride and our own need to be right, we can see instead that each of us is called by name, invited to be part of God’s people in this place, given as a gift to a community that is called, gathered, enlightened and made holy by God’s own Spirit.

Rabbi Sacks says the simplest definition of the Abrahamic faith of which we are the descendants, is this: “It is not our task to conquer or convert the world or enforce uniformity of belief. It is our task to be a blessing to the world.”  When we step back from what divides us, and turn instead to what creates the Body of Christ here among us, we wake up to our true mission, our call to ministry, our hope for a future in God’s grace.  Amen.

All are welcome to join us at worship. Sunday Mornings: Worship at 9:30 am with communion every week with the option of also with Zoom. We love to have babies and toddlers at worship, and the wiggles and noise delight us.  Little ones are welcome at Sunday School(not in the summer) if they are … END_OF_DOCUMENT_TOKEN_TO_BE_REPLACED