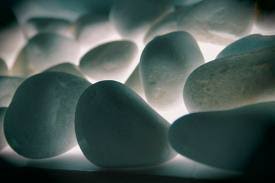 1 Peter 2: 2-10 You can click on this link to read the text in Oremus Bible Browser.

What caught my ear when I was reading through all the readings for May was the “living stones,” metaphor.  Jesus, the living stone, rejected by mortals but chosen by God, and we, as the descendants of Jesus’ work on earth as living stones being built into God’s house ourselves – a royal priesthood.  What a remarkable idea.

I remember the Bible story in which Jesus and the disciples are sitting on a hill across from Herod’s Temple, glorious in the afternoon sun.  They are admiring it; the magnificent stones, the glow of the golden stone in the tempering light.  In Middle Eastern religions, the temple is the place where God dwells.  That is why it was required to go up to Jerusalem on the most important feast days to present yourself before God.  The temple was the only place where sacrifices were performed and accepted.  It was the very center of the Hebrew religious tradition.  Jesus tells them that the temple which they so admire will be thrown down and destroyed; “not one stone will be left upon another.”  (Mark 13: 1-4)

It is one of the central themes of the four Evangelists that Jesus himself has replaced the temple as the place where God can be found among God’s people.  And this is certainly what Peter is saying in the reading we have before us this morning.  But if Jesus himself is the living stone of the temple of God’s presence in the world, then his followers are also living stones of God’s presence.  It’s an amazing claim about them and about us.

We feel so far removed from Jesus’ time and the beginnings of the new traditions. His followers moved out of the Hebrew tradition and into something vitally new. The promises of forgiveness and the acceptance of all people lit them on fire and made them want to share it with the whole world.  However, we are the heirs of long line of church which told us how to organize our lives, the correct way to interpret scripture, often shamed us into seeing ourselves as worthless and wretched, and preached a gospel of doing the right things so we could go to heaven.  As much as church introduced me to Jesus and opened my heart to trust God through the Holy Spirit, it often felt intellectual and complicated and had little to do with my ordinary life.  The vitality that shines through the story of the new church and its missions didn’t always happen in my experience of church.

Peter is writing this letter to people who have been scattered across the world; those who have been thrown out of Jewish communities and new Gentile believers who don’t have the Biblical background to feel at home in worship.  These people are exiles and refugees, lost in a world that didn’t embrace Jesus and doesn’t embrace them.  Peter wants them to trust a new identity, an identity in line with that of Jesus.  He wants to give them a new sense of their roots in the tradition out of which Jesus comes, and in which they are God’s people.

“Once you were not a people, but now you are God’s people.”  “You are a chosen race, a royal priesthood, a holy nation, God’s own people, in order that you may proclaim the mighty acts of him who called you out of darkness into his marvelous light.”

So, “like living stones, let yourselves be built into a spiritual house, to be a holy priesthood….”  This is not about checking a box on Sunday morning.  It is about being about the work that Jesus himself has begun, feeding, healing, and raising the dead.

We are not called to come to church, we are called to be the church. We have work to do to build God’s Kingdom here, to change the world bit by bit into the Kingdom that God sees our world becoming.  And we do.  For example:

How many of you serve the city or county or state as officers and volunteers?

How many of you are active in organizations that feed people, educate people, heal or comfort sick or dying people?

How many of you have taught Sunday School, Confirmation, brought your children or grandchildren to church and taught them about faith?

How many of you have led a Bible study, preached or led worship, shared your faith in your congregation or another organization?

How many of you are caring for someone aging, in failing health, managing chronic illness or mental illness?

How many of you care for a garden, eat carefully and guard your health, share produce, guard the environment or care for the safety of others?

Gandhi said to be the change you want to see in the world.  Peter says something similar: be the stones that build up God’s Kingdom right here on earth.  Be the priesthood that celebrates God’s presence with us now.  Let your love of Jesus be what moves you be just like him, bringing heaven to earth today.  Amen.

All are welcome to join us at worship. Sunday Mornings: Worship at 9:30 am with communion every week with the option of also with Zoom. We love to have babies and toddlers at worship, and the wiggles and noise delight us.  Little ones are welcome at Sunday School(not in the summer) if they are … END_OF_DOCUMENT_TOKEN_TO_BE_REPLACED