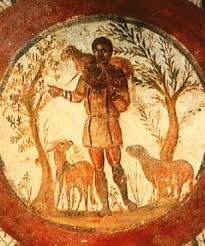 If you click on the link above, it will take you to Oremus Bible Browser and the Scripture reading cited for this message.

When we go to Ochoco Care Center, we always read/recite the 23rd Psalm, and invite the people there to say it with us. Actually, I read it, and they recite it, in the old version from the King James Version. It’s the way they learned it, probably as children, from a mother or grandmother, Dad or Grand Dad. Even though many of them could not carry on a conversation, they can say this Psalm right along with me. It is the most familiar Bible passage after the Lord’s Prayer.

One of the first images of Jesus in the early church is a picture of Jesus as the Good Shepherd with a sheep draped around his shoulders.   Even though most of us have not ever had the experience of calling the sheep into the sheepfold, even though we may not have been the lost sheep that Jesus comes after, even though the imagery of the Psalm with its green pastures and still waters is not our every day scenery, we can still feel the comfort of knowing that Jesus is the most special of shepherds, willing to give up everything for the life of his flock.

In the story just before this morning’s reading, Jesus has healed a man who was born blind. He healed him on the Sabbath, by putting mud on his eyes and telling him to wash his face in the local fountain. The religious authorities are scandalized and accost the healed man pressuring him to call Jesus a sinner because he broke sacred laws. Exasperated, the healed man claims that Jesus must be from God or he could not have done such a miraculous thing as restoring the sight of someone who was blind from birth. At that, the religious authorities drive the man out of the city. Jesus comes to find him and restores him to fellowship, accusing the religious authorities of their own blindness by their unwillingness to believe what is right before their eyes. Then Jesus begins to summon up the ancient images of God’s prophets and rulers as shepherds of God’s people, and of God as shepherd.

I have to say that in today’s polarized world where you have to take sides in every debate and black and white sides of the controversy are the only sides allowed, Jesus’ words seem truer than ever. The voices of outrage hurt my ears these days, insisting that if you don’t condemn people who disagree with your politics or theology, you are not a true enough believer. Hired hands and scatterers are everywhere, blaring rules and regulations and accusations. I think that it is easy when you are passionate about what you believe in, to lose sight of the quiet voice of Jesus, inviting people to come in sit in his presence and listen to the voice of God’s love. Jesus, the Good Shepherd, lay down his life for all people, good, bad, and ugly. That includes us, the good people, who are not included by how good we are, but by God’s great love for us. We are only included and invited into the Sheepfold because God, in Jesus, was willing to bear the injustice of tyrannical regimes both political and theological, and to overcome even death to bring us forgiveness and mercy. All of us are saved by God’s grace as a gift, not by anything else.

In words of comfort and hope Jesus says, “I know my own and my own know me, in the same way that my Father knows me and I know him.” So close, so intimate, so like parent and child. No matter how old my daughter Rachel gets, I can still pick her out of a crowd by her posture, that distinctive way she stands, that is recognizable even in the pictures of her as a toddler. And then he says something quite extraordinary: “I have other sheep that do not belong to this fold. I must bring them also and they will listen to my voice. So there will be one flock, one shepherd.” That means that even now, Jesus isn’t finished gathering in those he loves and invites. Could that mean the people we are praying for who haven’t come to church in a long time, or who have never been part of a church even though they are deeply involved in building up their communities? Could that mean even people who are faithful practitioners of other kinds of faith? Could that mean people that we think of as beyond saving?

I certainly don’t know what Jesus is up to, and I love that idea that God isn’t finished yet, inviting all kinds of people into Jesus’ sheepfold. To hold that thought as a possibility means that I have to suspend my own narrow categories of who is in and who is out, and let Jesus worry about that as he continues his work. But it also means that I, and we, might be the very avenue through which he is working to encourage, invite, or embrace someone who is on the outside. It means that I have to continue to be present in my church community and my world as part of that flock, living the law of love for all people, praying for the people I know and don’t know who are still on Jesus’ agenda. It means that everything that I do to make the world more just, more peaceful, more secure is working with Jesus to change it into the Kingdom of God. It means that if Jesus isn’t finished loving and inviting, then I am not finished either, loving and inviting and letting my life show that my heart has been changed. Because we are Jesus now, the Body of Christ in this place and part of Jesus’ flock in the wider world.

So come, Good Shepherd, gather me into your sheepfold and hold me close, and use me to gather in others who are not currently part of your flock, so we may all be one flock under one shepherd, as your Father has commanded. Amen.

All are welcome to join us at worship. Sunday Mornings: Worship at 9:30 am with communion every week with the option of also with Zoom. We love to have babies and toddlers at worship, and the wiggles and noise delight us.  Little ones are welcome at Sunday School(not in the summer) if they are … END_OF_DOCUMENT_TOKEN_TO_BE_REPLACED