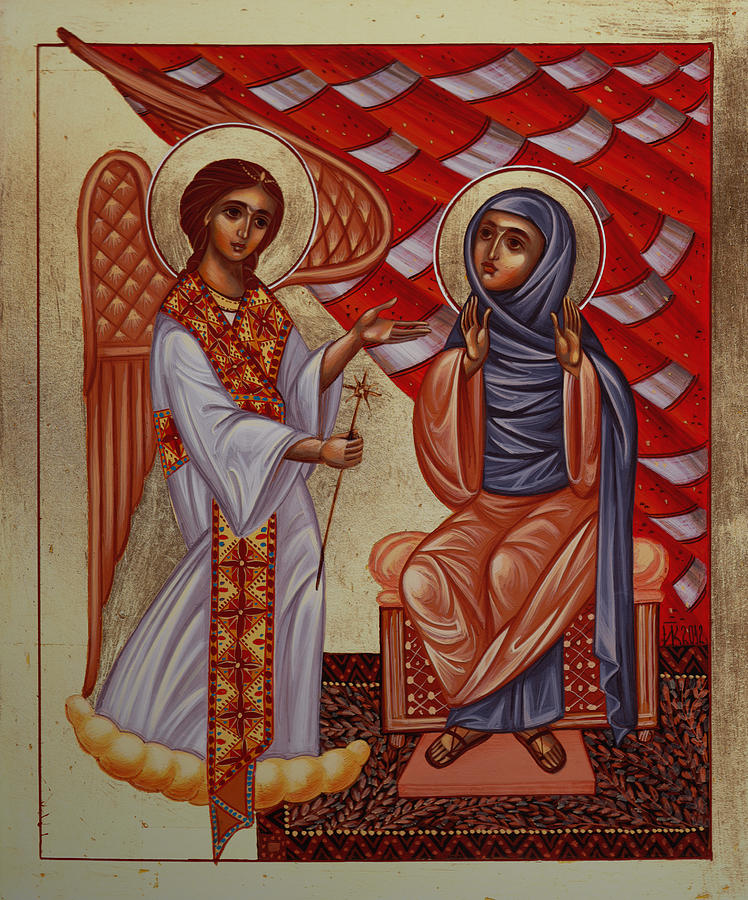 From the Annunciation to the Cross

We are so used to hearing the Christmas story mashed together on Christmas Eve that we often forget that there are two stories that differ significantly.  It’s also easy for us to see the stories with a glow around them – Linus reading the story from Luke’s Gospel to Charlie Brown.

The scholar Raymond Brown says that the “birth narratives” those stories of the baby Jesus, contain the whole Gospel in miniature.  The Messiah is announced, born, his presence is proclaimed to an audience, which comes to witness the Messiah’s arrival, and goes off to testify about it.  Some people accept the story and believe in the Messiah, and some do not believe and reject him.

So this morning as we prepare for the season of Lent, let’s take a look at these infancy stories to see if we can find connections to their Scriptural background and about the end for which they are preparing us.

First, we have the Annunciation to Mary, we have so beautifully sung. The first Chapter of Luke tells the story of two extra-ordinary pregnancies. Elizabeth, who has been waiting so long, is granted a baby just before it’s too late. Mary’s story is the opposite.  An unwanted pregnancy to an unwed mother, who trusts the word of the Angel and humbly accepts all the possibilities that this child will bring.  Throughout the ancient world, the sign of divine presence is the birth of a special child, who becomes the beginning of new life for his people.  In the Hebrew Bible there are Isaac, Joseph, Moses, Samson, Samuel.  Mary’s song of God lifting the lowly, echoes the song of Hannah, Samuel’s mother who was blessed with the child for which she fervently prayed.  The theme of creating a peaceable kingdom by bring justice to the earth continues throughout Luke’s Gospel. He will show Jesus having a preference for the outcast, the sinner, the hungry, the stranger.  These are signs of the Kingdom of God breaking into the world.

In Matthew’s story, the Annunciation is to Joseph, the dreamer, who trusts that the message he receives in his dreams is from God, and acts.  Remember another Joseph, the dreamer?  The one who was able to save his whole world from famine because he trusted that God was at work in dreams.  Joseph marries Mary and prepares to protect this baby conceived by God’s Spirit. Every baby changes the life of his or her parents forever, but Mary and Joseph accept in faith that their child will change the life of the world.

The accounts of the actual birth are so brief in both stories, but the proclamation of the birth is spectacular.  In Matthew, a star rises in the East to announce the birth of a new king.  The Magi, foreign astrologers are the ones to see it, and understand it.  Matthew’s story echoes the prophecies of Isaiah about nations coming to your rising, and the Messiah being a light not only to Israel, but to the nations. The Jewish scholars have the scripture to identify the actual location, but it is the foreigners who come to worship and bring gifts. The Jewish Scholars do not accept the idea that this baby could be the Messiah.  But Herod is extremely threatened by the possibility of a new Jewish leader. Herod rejects this new king, murdering all the possible babies in the town of Bethlehem in order to crush any challenge to his sovereignty.  This conflict with the authorities, religious and political, will continue to define Jesus’ ministry and become the cause of his betrayal and death.  In Luke’s story, an angel floods the night sky with light to announce the birth of a “Savior who is Christ the Lord.”  The angel is joined by a sky full of angels singing God’s praise.  Like the Magi, the shepherds come to worship, and go off to tell the world what they have seen.

Matthew tells us that Joseph follows the command of the Angel in a dream once again, and flees with the baby and his mother into Egypt.  More echoes of the original Joseph, and his journey to Egypt. in his Gospel, Matthew casts Jesus as the new Lawgiver, and here we also have echoes of Moses coming out of Egypt to save God’s people from slavery, as Jesus will lead all God’s people, not only the Israelites, from death to life.

Luke’s story brings the family of Jesus to the temple for Mary’s purification, where they meet Simeon and Anna.  Jesus’ family is deeply rooted in their religious tradition, and obedient to both the Jewish and Roman laws. Simeon declares the baby “a light to the Gentiles and the glory of your people Israel.”  He predicts that this child is destined for the fall and rising of many, and a sign that will be spoken against so that the thoughts of many will be revealed.  And he also predicts how hard it will be for Mary, to see her son so involved in his mission that he has no time for her, and that at the end, she will witness his brutal murder.

So in both stories, we see the Messiah announced, born, proclaimed, and both worshipped and rejected.  From the doors of the inns being shut to him before his birth, he is rejected by as many people as those who accept him as God’s promised Savior.

So what is the “So What” part of this extended Bible Study?  Two things, I think.  First, that Jesus’ life included all the drama and trauma of the lives of every human.  Nothing was simple.  Nothing was ideal. Jesus truly lived the same life as we do with loss and protection, narrow escapes and blessed serendipities, and God’s presence always manifest to remind him that he is beloved.  Second, that death is never the end of the story.   The love that raised Jesus is the same power at work to transform our hearts.  We live in the Kingdom of God that began on the day of Jesus resurrection.  At the same time we live in the kingdom of the world in which we are vulnerable to tragedy and illness and hatred.  The love of God that is transforming our hearts is also using us to make this sad kingdom more and more into the Kingdom of God.  It’s our mission and our hope.  It’s our salvation and our ministry. From the very beginning, in Jesus, we see that God’s story is our story, and our story is God’s story.  Amen.

All are welcome to join us at worship. Sunday Mornings: Worship at 9:30 am with communion every week with the option of also with Zoom. We love to have babies and toddlers at worship, and the wiggles and noise delight us.  Little ones are welcome at Sunday School(not in the summer) if they are … END_OF_DOCUMENT_TOKEN_TO_BE_REPLACED