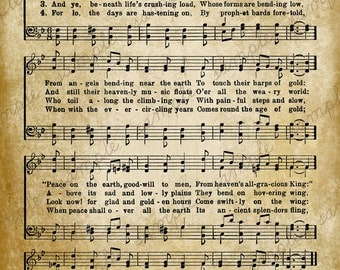 If you have a hymnal, you can find these hymns and sing along.  If not, you can probably find the texts, and maybe find a sung version on-line.  Sorry you missed singing with us.

This morning, instead of preaching from the pastor, we will let some of our Christmas hymns preach the Word to us. We’ve chosen an few that we don’t sing regularly.
All hymns do something remarkable: they teach us in ways that engrave information on our memories more permanently that any other method of learning. We have witnessed it in our singing at the nursing home. Someone who is unable to carry on a conversation with you can sing all the verses of “In the Garden” with you.

So it is with Christmas Carols. They are hymns which have told the story of the birth of Christ and it’s meaning for the world over the centuries. Often we are so used to singing them that we don’t really pay attention any longer to what they are teaching us or telling us.

So this morning we will look at some Christmas hymns we sing, some familiar, some not as much, by looking at what they tell us about God’s gift of Jesus and what it means to our world. No hymn tells the whole story, rather, each one is a reflection of a particular aspect of the story. We, as the church which sings these hymns, provide the context for the story which the hymn writer emphasizes.

“It Came Upon the Midnight Clear.” (ELW 282) Stephanie Fahlgren talked about this carol a while ago when she had a chance to share her favorite in one of our “Hymn-Sing” Sundays. This carol doesn’t have a baby in it. It was written by Edward H Sears (April 6, 1810- January 16, 1876), a Unitarian minister in Brattleboro VT. He believed fully in the divinity and humanity of Christ, and in the change in the world that it made, when God came to earth in person. The focus is on what happens after the declaration of the Angels of “Peace on earth, good will to all, from heav’ns all-gracious king.”

It assures us that the angels are still singing their message in our own day if we can just hear them above the noise of regular commerce. The third verse, Stephanie’s favorite, seems to be a message of comfort for those who are crushed by the world, but the second part of that verse originally read, “And man, at war with man, hears not/The love-song that they bring./Oh, hush the noise, ye men of strife,/And hear the angels sing.” You can read this hymn as a cry for justice in a world that does not hear the angels voices, or as the call for the justice that results from the incarnation of God in Jesus.

The tune was written by Richard S. Willis (February 10, 1819 – May 7, 1900), and published in Church Chorals and Choir Studies (1850). Although it was not originally written for this hymn, and used for two other hymns previously, the tune fits perfectly with the ideas of the verses as well as the progression of them through the stanzas. The lilting meter and upward ascent of the melody are an excellent match for words.

“Of the Father’s Love Begotten,” (ELW 295),was written in the 5th Century by Marcus Aurelius Clemens Prudentius (348-413). It was translated in 1851 from the Latin by John Mason Neale, and Henry Williams Baker, added the doxology at the end, and revised it slightly in 1861, including it in Hymns Ancient and Modern. The text draws on the earliest understandings of who Jesus is in a time when there was still much controversy about how much he was human and how much divine. The original hymn – the first three verses, grounds Jesus in the Trinity, in the Alpha and Omega titles of Revelation, and in the ancient Scriptures. All of these concepts were beyond controversy at the time they were written. Prudentius was from Northern Spain, a judge and scholar, who became a monk at age 57, creating many such devotional and liturgical poems.

The tune “Divinum Mysterium” seems to come from the 13th Century, originally used for a “Sanctus.” It was attached to John Mason Neale’s version of the poem in 1851. It has been represented in many rhythmic settings, most commonly these days in a version that represents it as plainsong chant.

“What Child Is This?” (ELW 296) uses the gospel story of King Herod and the Wise Men as its point of departure, so the glance ahead to the nails, spear, and cross are not such a surprise, given the massacre that occurred according the Matthew stories. Written by William Chatteron Dix (June 14, 1837-September 9, 1898), it first appeared in Bramley & Stainer’s Christmas Carols Old and New (London, 1871).

Dix was the son of a famous surgeon who was also a prolific writer. Our Dix wrote many Christmas and Easter carols and many other religious and devotional books, and translated many Greek and Abyssinian hymns.

The tune “Greensleeves,” is credited to two separate sources, appearing suddenly in 1850. Richard Jones received a license for a tune “a new Northern Dittye of the Lady Green Sleeves,” and Edward White, a license for “A ballad, being the Ladie Green Sleeves Answer to Donkyn his friend.” Whatever its origins, it is a haunting minor melody that never reaches a resolution, creating an open-ended sense that contributes to the projection into the future for this baby.

All are welcome to join us at worship. Sunday Mornings: Worship at 9:30 am with communion every week with the option of also with Zoom. We love to have babies and toddlers at worship, and the wiggles and noise delight us.  Little ones are welcome at Sunday School(not in the summer) if they are … END_OF_DOCUMENT_TOKEN_TO_BE_REPLACED