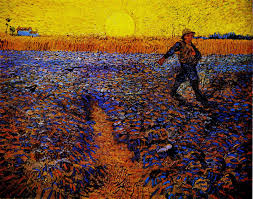 My favorite part of Jesus’ preaching is when he tells a story to illustrate what he’s trying to share.  Maybe his stories reflect his own experience of God, or maybe he’s just trying to come up with an example that will sink down into a person’s consciousness and stick for awhile. These stories are called parables, a word that comes from a Greek word which means to “throw alongside.”  So in his stories, Jesus puts one reality alongside another so that we can see it more clearly. Parables could be true, but they are not; there is a always a twist that the people of the day would surely realize is kind of exaggerated or silly, or sometimes just plain unexpected.  So today we have one of the most famous of Jesus’ parables, usually called the Parable of the Sower and the Seed.

I’d heard this story all my life, when 20 years ago my brother Richard came back to church after not attending for more than 20 years.  It was a big event to him, made even bigger by his being joined by his new wife, who had serious baggage with church and swore she’d never set foot in one again.  Suddenly I heard this story differently.  In all the years before, I’d been rather proud of the fact that I was such good soil, that the Seed of the Word landed in a fertile place and had been playing out in my daily life for a long time.  I had felt sorry for those other kinds of ground – stony hearts, lives choked by distractions that pulled people away from God, shallow faith that failed just when you needed it most.  I was so grateful that I was none of those unfortunates, and I was sure that God was quite as pleased as I was at how deeply rooted my faith was.

That year the focus of the story shifted for me.  What if the story wasn’t so much about what good soil you were, but about the farmer, the sower, who was so generous with his seed that he threw it out on all that barren and shallow soil year after year, never stopping until even the stony ground was softened up by the repeated work of roots and birds.  What if it didn’t matter how productive the soil or the seed seemed to be, the sower wasn’t about to quit even if the chances of a change were miniscule.

Matthew tells us that Jesus was teaching beside the Sea of Galilee.  I was just there a month ago, standing high on a mountain that overlooks the sea and the Jezreel Valley below.  That valley is the ‘bread basket’ of Israel, and you see lush green plots that shade off into the distance, growing every sort of crop.  We passed fields of corn and sunflowers and row crops of all kinds.  So this story of the Sower and the Seed would have mirrored the lives of the people to whom Jesus was speaking.  They saw sowers and reapers in every season.  They knew what it was like, and the twist was probably at the beginning with the sower being so energetic in his sowing that the seed went everywhere.  Maybe they even had a chuckle as they walked away, imaging the difference between the fields yielding a hundredfold, or sixty, or maybe just thirty, an exaggeration to be sure.  “Listen up, if you have ears!” says Jesus, as if what his story tells us is so plain.  But the disciples want an explanation.  Thank you.

Commentators are pretty much with the disciples, wondering if Jesus is telling this story at this point in his teaching and healing ministry because it is becoming clear that some people believe and some do not; some people who followed are drifting away.  OK, why not?  But I believe that this is a story that is always true.  When I think of the people who don’t have a church home, I know that a lot of them carry hurt from an earlier experience with church.  Like my sister-in-law, who was part of a church that told her what was wrong with her instead of reassuring her that God loved her.  Some people are too smart for church, thinking that they have to figure out life for themselves and make their mark on the world with their diligence and intelligence.  Some people have never been inside a church, and only know the sensational stories about the people who kill abortion doctors or picket military funerals, never having met a person who talks about how their faith guides their lives to be caring and forgiving.

AND…God is always at work spreading the seed of his word, through people like us, through organizations like Lutheran Community Services and St Vincent’s, through that longing in people’s hearts to find a place of peace where they can rest.  The thing is that it’s not what the soil does, and it’s not even what the seed does that makes a difference.  It’s God, the Sower, who never quits, who never gives up, even on the stoniest ground.  We don’t have to do anything to be good soil, except receive the seed of God’s love for ourselves.  It’s free.  You can’t pay for it, you can’t earn it, you can’t be good enough to deserve it.  It comes because God the Sower is constant, never stopping until all those whose hearts have been filled with God’s love are gathered into God’s presence forever.  A good farmer removes the rocks that make the soil unproductive, cuts back the brambles that interfere with growth, keeps working the soil until it is all ready to yield.  Thanks be to God for never giving up on our rocky, brambly hearts.  Thanks be to God, for fellowship in the faith that encourages and reminds us when we are filled with anxiety.  Thanks be to God, for the Holy Spirit, always at work in us to bring us into God’s house, give us the Word that brings us peace, and walks with us without fail.  Thanks be to God.  Amen.

Now may the peace of God which passes all understanding, keep your hearts and minds in Christ Jesus, our Lord.  Amen.

All are welcome to join us at worship. Sunday Mornings: Worship at 9:30 am with communion every week with the option of also with Zoom. We love to have babies and toddlers at worship, and the wiggles and noise delight us.  Little ones are welcome at Sunday School(not in the summer) if they are … END_OF_DOCUMENT_TOKEN_TO_BE_REPLACED